Hey Everyone! The Underwords Blog has been quiet for awhile, and I am taking this moment to break the silence and share with you one of the projects that I have been working on over the last six months. BOSKONE!!!

As you may (or may not) know, I also help to plan and organize science fiction and fantasy conventions. The one I love most is Boskone, which takes place in Boston, MA from February 19-21, 2016 at the Westin Waterfront Hotel.

If you love books, movies, games, and anything connected to science fiction or fantasy, you should consider coming to Boskone this year. We have have a fantastic line up of Guests as well as over 150 other authors, artists, musicians, scientists, and publishers who are coming…and it is going to be a fantastic event.

Online registration is open through midnight on Saturday, February 13, 2016. So, if you want to save some time, definitely take a moment now to register online. However, if you miss the window, you can still buy your membership at the door.

* Valid school ID may be required.

Boskone Reception & Meet the Guests: Step it up, and join us in the Galleria for an upscale social mixer where with Boskone’s Guests and program participants. Come meet this year’s guests:

The Videri String Quartet will be performing in the galleria from 7:30 PM to 9:30 PM! Cash bar available. (Friday)

Noir at the Bar – Special Edition: Noir at the Bar is a popular literary series that has “sprung up all over the country.” Boston’s Noir at the Bar series comes to Boskone on February 19th for a special night of readings, fun, and prizes with our noir, crime, mystery, and horror writers. 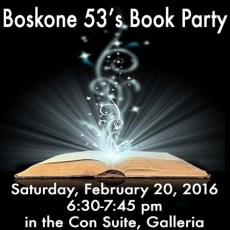 Boskone Book Party: Join the party, buy books, grab some swag, and have a fantastic time adding new material from nearly 20 of your favorite Boskone authors to your bookshelf.

Publishers and authors come together to in the Galleria to share what’s new since last year. This year NESFA Press is also launching two anthologies: The Grimm Future, edited by Erin Underwood, and Conspiracy!, edited by Tom Easton and Judith K. Dial.  (Saturday)

Boskone Rapid-Fire Theater and NESFA Awards Ceremony: Tonight’s presentation: a fast-paced theatrical extravaganza, featuring a set of mini-shows that resemble live-action “podcast experiments.” This special Saturday night program has something for everyfan. We hope you’re entertained, amused, soothed, gratified, provoked, intrigued, informed, or if possible all of the above in swift succession. Hosted by Boskone’s very own David G. Grubbs. (Saturday)

THE RULES: Boskone members are invited to join our participants in the open mic by signing up for one of the eight open slots at the door to the event, which opens for sign-ups at 8:30 pm. Each performer is given a firm 5-minute time limit (max), including set-up time. So a quick transition between acts is key. (Saturday)

In addition to these signature events, we also have over 350 other program items . . . and much, much more! You can view the Boskone 53 Program Schedule here.

We also have more than 150 amazing writers, artists, publishers, scientists, and editors coming back to Boskone. Some of our program participants include:

You can view the full list of program participants here. 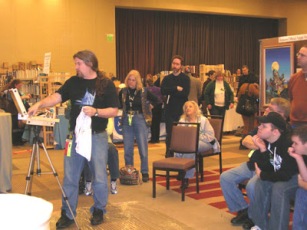 This year’s Art Show is truly amazing, featuring work by our Official Artist Richard Anderson, a retrospective by NESFA Press Guest Bob Eggleton, and a Spectrum inspired exhibit in honor of our Special Guests Arnie & Cathy Fenner (organized by Edie Stern and Joe Siclari), which includes work by more than 35 artists that spans more than 20 years of speculative art.

There are also dozens of speculative art program items, demos, and discussions. In addition, we also have a number of artists who are attending as program participants as well as members this year, including Tommy Arnold, Rick Berry, Kristina Carroll, Scott Grimando, Stephen Hickman, Ingrid Kallick, Tom Kidd, Gary Lippincott, Sheeba Maya, Omar Rayyan, Ruth Sanderson, Dave Seeley and many others!

There is so much more to share, but let me finish by saying…. I love this convention and I am so happy to be able to share it with you. If you’re going to be in Boston, MA from February 19-21, 2016, it would be awesome to see you there.

This entry was posted in Boskone, Uncategorized. Bookmark the permalink.