It’s April and well past the time for a “looking back” post, but since a few fun things from 2016 have popped up, I thought it was worth a quick note. 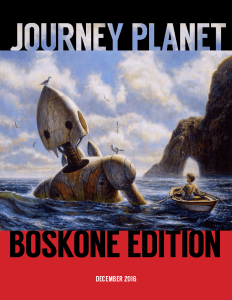 Last year, I guest edited one of the 2016 Journey Planet fanzines. My edition was Journey Planet: Boskone, which featured 54 years of Boskone history, and the layout design was done by the very talented Errick Nunnally.

A few days ago, I found out that Journey Planet made the 2017 Hugo Ballot for Best Fanzine, which means that I am among the Journey Planet editors who are listed on this year’s Hugo Ballot. (My name is on a Hugo Ballot. I still can’t quite wrap my mind around that fact!) It’s an incredible honor to be nominated and to have been a part of Journey Planet last year, especially since my edition allowed me to focus on a topic that is near and dear to my heart: Boskone.

Congratulations to all of the 2017 Hugo Nominees and good luck to everyone! I look forward to seeing you all in Helsinki for Worldcon 75 and the Hugo Awards Ceremony.

This entry was posted in Boskone, Hugo Awards, The Grimm Future. Bookmark the permalink.