Review: Game of Thrones: Season One

Author’s Note: There have been endless recaps and thematic analysis of Game of Thrones, the new HBO television show based on the Song of Ice and Fire Novels by author George R.R. Martin.  The Thrones blogging of James Hibberd (Entertainment Weekly) and James Poniewozik (Time Magazine) are particularly recommended.  Rather than recap yet again, I’ve written this review for those viewers who have seen the first season in its entirety, and who are interested in critical reaction to the whole. Like many people I’m coming at this as a long-time reader of the books.  Spoilers for both the show and the novels may occur.

It took awhile but HBO finally woke the dragon.

For awhile I was worried.  As a raving fan of George R.R. Martin’s A Song of Ice and Fire books (why, yes, I did have a Daenery’s Targaryen cake-topper at my wedding!), I pinned a lot of geek-hope on David Benihoff and W.B. Weiss’s Game of Thrones adaptation—hope that began to sink as the first five episodes bogged down in lifeless exposition and irritating “sexposition”—a term the show has the dubious honor of coining. (The frequent inclusion of Ros (Esme Bianco), a prostitute who figures in the books for only a sentence, gave the writers a chance to slyly explore the show’s themes of power as our working girl goes from Back Alley Sally to upper-crust concubine, but the time spent on her heavy breathing might have been better employed to build other aspects of the story.) One of the most vital aspects of Martin’s series is his carefully constructed back-story: the tale of how noblemen Ned Stark and Robert Baratheon triumphed over the despot rulers of House Targaryen in the first place, wreaking long-reaching consequences for everyone involved.   The various details of this past conflict only become more important as the series goes on, and they seemed ill served by the show’s strategy of having Ned (Sean Bean) conduct a series of increasingly Byzantine interviews with Jaime Lannister (Nikolaj Coster-Waldau) and Sir Barristan Selmy (Ian McElhinney) as they pause between beheadings.

But right about the time Visery’s Targaryen (the excellent Harry Lloyd) received his golden crown, the show finally found its footing and, by the bitter, breathless end all naysayers seemed poised to eat crow. Benihoff and Weiss may not always pick my favorite mode of execution but they understand the spirit of Martin’s work.  The final image of Season One not only captured the convention-defying nature of the novels, it acted as a gleeful comeback to the likes of New York Times critic Ginia “Boy Fiction” Bellafante: in world rife with phallic swords and hard-ass male bravado Thrones’ last image belonged to a naked woman risen phoenix-like from the ashes of defeat—and brandishing the Westrosi equivalent of three nuclear weapons.

If only the beginning of the show had come on as strong.  Episodes 1-3 were maddeningly hit-and-miss, episodes 4-5 full of more exposition than the first three combined. Three questions in particular really began to bother me.

Thrones’ gorgeous production design has been justly praised (even by Ms. Bellafante) but, while the replacement of Martin’s eldritch Walkers (called “The Others” in the books) with a bunch of weird bark-encrusted giants is a rare slip, it bears remarking upon.  Another Times columnist, Ross Douthat, has correctly pointed out that budget concerns may keep elements like the direwolves and a few lesser battles (hey!  Tyrion’s supposed to swing an axe—not get thumped by a mallet!) from ever being realized on the small screen.  But the lack of direwolves, whose connection to the Stark children becomes plot fuel later on, is both noticeable and disruptive of the show’s continuity.  Side characters are reduced to talking about the noble beasts (“I heard he killed twelve men and horses!”), and the beasts themselves come and go with the suddenness of an on-off switch: there in some scenes, M.I.A. in others.

All of this is nitpicking, however. The real problem for Game of Thrones, and one that will haunt it throughout its duration, is the sad neglect of the back-story—the all important framework upon which Martin has hung his themes of honor, loyalty, and history endlessly repeating.  We never get a single flashback to past events (sound cues at the end of Episode 3 do not count) and, consequently, all the talk of Mad Kings and past murders never escapes the realm of gnomic utterance.  (“Seriously, you two.  Just fight or make out already!” groaned Entertainment Weekly’s James Hibberd after a dialogue between Jaime and Ned, attempting to clarify past allegiances, fell on its face.)

Any doubt as to the show’s failure in this department is dispelled by the fact that the HBO website is riddled with supplemental material explaining all the character associations you aren’t getting from the actual script.  Weiss and Benihoff have great respect for their source material, but unless newbies watch a spotlight video on HBO.com they’ll be hard pressed to understand the symbolic heraldry of each house, the (rather ingenious) opening credits, Ned’s (increasingly important as the show goes on) family history, or who the hell Littlefinger is.  All these details are vitally important to the story—but Thrones’ writers, perhaps reluctant to mimic other fantasy films like Peter Jackson’s The Lord of the Rings, staunchly refuse to provide us with any flashbacks and hence, like Aragorn without Isildur, the first half of the show lacks the context that made the novel resonate.

Of course, at some point, you just don’t care.  After spotting along in the first half, the show powers through its second, beginning with some brilliant acting by Mark Addy (King Robert) and Lena Headey (Queen Cersei) in Episode 5.  Their breakfast-table tête-à-tête isn’t in the novels but Addy and Headey make you wish it had been.  In a rare, unguarded moment these combative characters, one villainous, one soused (and deserving of an Emmy), reveal humanizing layers of vulnerability that make you see them in a different light.  It’s the sort of thing Martin excels at, and a sign that Thrones’ writers have at last grown comfortable enough with the material to own it.

Shortly thereafter Harry Lloyd elicits similar feelings of grudging sympathy as his mad, doomed Viserys opines that the fearsome Dothraki he’s hired to win back his kingdom will never love him the way they do his sister, Daenerys (the lovely and talented Emilia Clarke). We’re ever-so-slightly sorry that the little creep gets crowned with a cauldron of molten gold—but hey, that’s Martinland and we’ve finally arrived! Episode 8, penned by the big man himself, is far and away the best episode of the season beginning with a massacre and ending with whispers of foreboding as the shadow of the Iron Throne (symbolism! symbolism!) eclipses a shivering Sansa Stark (Sophie Turner).  Whatever his medium, Martin knows how to put the “Om” in ominous, and that eerie, pointed shadow sliding up from the foreground of the screen is portent-fraught nirvana.

It’s also an example of how the show succeeds best when it sticks closest to the books.  Yes, neither the Robert/Cersei breakfast nor the Viserys scene appear in the novels but they honor the essence of Martin’s writing, and I don’t think it’s an accident that the second half of the show succeeds so well because it hugs the source material closer.  Early scenes that transplant important exposition into the mouths of unaffected characters (see the bizarre instance in Episode 4 where Aidan Gillen’s Littlefinger tells Sansa how the Hound (a perplexingly underused Rory McCann) came by his scars) merely telegraph information.

By Episode 6 the adaptation seems to trust that Martin’s former script-writing career has reliably informed his plotting and the hit-and-miss inventiveness gives way to the breakneck pacing and incident we all signed up for in the first place.  Here’s Tyrion (the superb Peter Dinklage) blazing away with wit and pathos (when an adversary asks him how he’d like to die he replies: “In my own bed, at the age of eighty, with my belly full of wine and a girl’s mouth around my cock!”).  Here’s Sean Bean’s Ned forced to defame himself before the mob.  Here’s Maise William’s Arya (the show’s child actors are all top notch) starting down her great, dark road, and Daenerys Stormborn giving birth to blood and flame.  Thrones’ great cast, not a weak note among them, say their lines with relish or resignation, live grittily, die tragically, and steal our breath with the ebb and flow of their fortunes.

It’s spectacle and drama of the kind we’ve missed since Al Swearengen uttered his first expletive—and if we had to wait for it, well, that’s okay.  Season Two is coming. 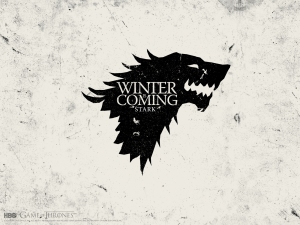 Hannah Strom-Martin is a penniless writer dependent on obliging friends for her weekly dose of HBO.  Google her for a slew of other pop-culture writings, most as petrified as a thousand year old dragon egg.

2 Responses to Review: Game of Thrones: Season One